Mixing within impacting and coalescing droplets of different surface tension

Effective mixing between impacting and coalescing droplets of different fluids in contact with a solid substrate is a crucial requirement for emerging printing technologies. Whilst recent studies have observed surprisingly little mixing between impacting and coalescing droplets of the same fluid [1], surface tension gradients could play a significant role in enhancing mixing when the droplets consist of different fluids through the contribution of Marangoni flow. An additional factor affecting the internal dynamics is the substrate’s wettability.
This work investigates the coalescence of a sessile and an impacting droplet of different fluids (several ethanol/water mixtures), with a range of surface tensions but similar densities and viscosities, in the surface tension dominant regime. Using two colour high-speed cameras, the internal dynamics and associated mixing are captured simultaneously from both the side (at up to 25,000 FPS) and below (at 7,200 FPS, through the substrate). This arrangement exposes both the detail of the flow through the depth of the droplet (side view) and the flow structures without distortion from the droplet’s curved surface (bottom view). Either a pH indicator or an inert dye is used to visualise the internal dynamics, with multiple lateral separations studied.
Our results systematically elucidate the role of surface tension gradients and resulting Marangoni flow on the internal dynamics, with significantly faster mixing exhibited compared to droplets with the same fluid properties. Various fascinating physical mechanisms are uncovered, including a jet across the free surface of the originally sessile droplet, which can either be enhanced or suppressed by modifying the relative surface tension between the original droplets (see the image sequence, where the surface tensions of the impacting and sessile droplets are 50 mN/m and 58 mN/m, respectively). Not only do our results expose beautiful physical phenomena, but they also have practical implications regarding lateral separation and order of deposition for enhancing mixing within impacting and coalescing droplets of different surface tension.

This work was supported by the Engineering and Physical Sciences Research Council (EPSRC) Centre for Doctoral Training in Fluid Dynamics at the University of Leeds under Grant No. EP/L01615X/1 and the UK Fluids Network under the Short Research Visits scheme. 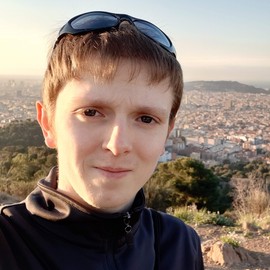